Posted on September 2, 2012 by askmaverick

During the 1980’s India was taken over by the VCR (Video Cassette Recorder) and Video libraries had mushroomed all throughout the Indian cities. We got our first VCR in 1987 and it became a regular feature for my brother and me to take a movie on rent and watch it over the weekend. The point is my brother’s (who was around 9 years old that time) first question to the video library guy after asking for a movie was, “Uncle is picture mein fighting hai?” (Does this movie have lots of action?). Expendables 2 lives up to that expectation and only that with lots of action sequences done by actors who were in their prime during the VCR revolution and are still fighting their way to box office success (Considering the box office collection).

Expendables are a group of mercenaries (an army which fights for money or private gain) comprising of veteran action heroes lead by Sylvester Stallone, high on testosterone,  low on IQ and the only thing they can do well is fight. The movie delivers everything what is expected of it in terms of action with mind boggling fight sequences and the climax seems like a one big party of action heroes from the 70’s and the 80’s. You sometimes feel that the action is there not for a reason but because the heroes just love to fight and can’t do anything else. Delivering corny one-liners these Macho men are not afraid of anything, even making fun of themselves, when in one scene Stallone says to Schwarzenegger that the airplane belongs to the museum, Schwarzenegger in his usual monotone responds “So do we”. The locales for the missions are exotic with the opening scene shot in Nepal after which they travel to Albania, Bulgaria, China. Expendables 2, with a simple plot and hard hitting action, is much more fun than the first part (at least I thought so). 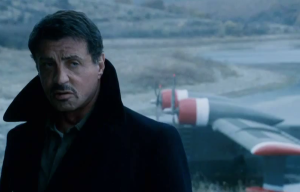 Sylvester Stallone as Barney Ross and the leader of the pack looks pretty fit for a 65 year old and I still secretly wish I can be like him, he exhibits his usual brute force and gets the job done. Jason Statham as Lee Christmas and the second in command of this team of musclemen is slick as ever and has some great action sequences all to him, in which he does not disappoint. Bruce Willis as Church (the guy who chose the Character names is one hell of a creative guy), is ok and hardly has much to do, still I guess it was obligatory to include him in this party. Dolph Lundgren as Gunner (who we all know as the Russian boxer from Rocky 4) is large and unkempt and surprisingly a feather has been added to his cap in this one by claiming he has a degree from MIT. Jet Li has a small role and is forgotten soon. Chuck Norris (the man who fought Bruce Lee at the Colosseum in The way of the Dragon)as Booker leads a lone battle against the bad guys finally decided to join the party way in the end. Jean Claude Van Damme one of the favorite martial artist hero of Hollywood plays the bad guy, looks threatening but is no match for these hungry mercenaries. Nan Yu is the lone woman and tries to match the guys but somehow she generated no interest. Terry Crews and Randy Couture complete the party and are just supportive. The surprise package in this one is Liam Hemsworth who surprisingly the youngest of the lot at 23, makes an impact as a sniper in this army. 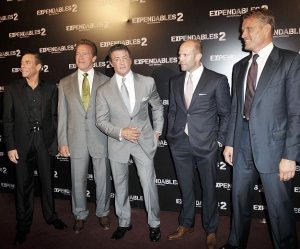 Expendables 2 is a a party of action heroes

Lastly, Arnold Scwarzenegger as Trench, well I don’t wanna say much because I still like him and his movies, I just felt sorry for him. He has just been given sarcastic one-liners in the name of dialogue though some of them still made me laugh, like, when Bruce Willis offers him a lift in the compact smart car he remarks, “My Shoe is bigger than this car”. But, I hope he gets better roles and I would love to watch him again.

Schwarzenegger though jaded and old still retains his sense of humour

I loved the movie and so did my movie partner (we see all the movies together which our wives don’t like to see) and probably the main reason for me and all men in their midlife to like it is that after watching these old men do action, we feel there is still hope for us. It fuels the macho man inside you and makes you believe that you are young.

Do watch it if you are an action fan.