My generation grew up on Sunday morning Star Trek series created originally by Gene Roddenberry  At one point of time I and all my friends thought of growing up to become Space Trekkers like Captain Kirk or Mr. Spock. Mr. Spock the lovable no-nonsense Vulcan and the Enterprise’s (as the space ship is called) First Officer who needs no introduction was a role model to us and has us kids aping his actions and look. When I come to think of it this fixation with the series has not grown any less with age and even after 30 years I still admire and love the characters as much. 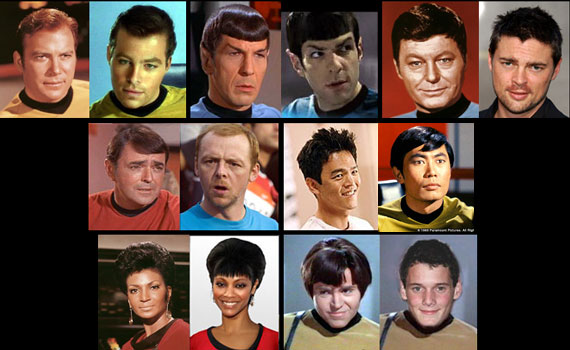 Into Darkness takes off from the first part of the Star Trek movie, with Captain Kirk heading the USS Enterprise and a selected crew to complete a mission to protect a Class M Planet Nibiru (It’s so cool when you read something like a Class M planet onscreen). The starting sequence however sets the precedent for the bitter-sweet but stronger than oak friendship of Kirk and Spock. Kirk with his “bend the rules” attitude and Spock with his “no-nonsense logical approach” take us on a whirlwind space trek on a manhunt to take on a dangerous one man army.  The Man on a mission to destroy the Starfleet is not seemingly what he is portrayed and the secrets that are unveiled form the basis of the plot. Star Trek is one movie where the plot needs to be as justifiable and strong as it characters because we expect them to perform superhuman feats. The plot though not as strong has been worked out brilliantly in terms of science and technology and will definitely keep you riveted to your seat. This is one movie I enjoyed in 3-D because it is fun to be exploring the final frontier as a part of the Enterprise’s crew. The first part was exciting because it showed us the origin of each character and how they became a part of the Starfleet, but I believe the second part and all the consequent parts would take us on an exploration beyond our imagination and it would not be fair to compare one to another (which a lot of people are doing).

The chemistry between Spock and Kirk is legendary

The characters are the heart and soul of Star Trek and I could write a separate post on each one of them and maybe I will one day. Chris Pine as Captain James Tiberius Kirk is brilliant with his boyish charm look and rebellious attitude. An undisciplined man in the most disciplined army of explorers Chris Pine is “made to order” for this role and like the English would say it “as cheeky as they come”. His friendship with Mr. Spock is legendary and despite Spock’s clinical approach, Kirk always manages to teach him a thing or two about relationships as well as leadership. Chris Pine is fast becoming onto a cult figure like William Shatner the original Captain Kirk.

Zachary Quinto I am sure would have been a big fan of Mr. Spock himself to have auditioned for the legend’s role. The casting for Mr. Spock would have been the most difficult for the production and Zachary Quinto would have been God-send for them. He fits into the role (with his Vulcan chiseled face) of Spock effortlessly like he was born to do it and fills in the shoes of Leonard Nimoy (the original Mr. Spock) with great ease. Leonard Nimoy has been a part of both the movies playing the older Mr. Spock from future and Zachary performance is unmatchable even in scenes shared with the original. His chemistry with Kirk is the highlight of the movie their dialogues have been written well with a lot of wit giving us the lighter moments.

Bones or Dr. McCoy played by Karl Urban is subtle, understated but a man who even Kirk listens too. Karl displays a personality and persona which makes him the perfect choice for Bones originally played by DeForest Kelley. Zoe Saldana as Uhura, the communications officer and Mr. Spock’s love interest is attractive and intelligent in character. John Cho (the famous Harold from Harold and Kumar series) as Sulu the resourceful helm officer of the enterprise (the driver of the spaceship to put it bluntly) and sometimes the acting captain is a treat to watch. Anton Yelchin as Chekov who doubles up as the navigator and an absent minded engineer has captured the accent brilliantly and uses it to charm you throughout the movie.

Simon Pegg as Scotty, the chief engineer and the funny man on the enterprise is no surprise and lights up the screen with his English accent and wit no matter how serious the situation is. Scotty comes as a savior at the worst of the time and Simon Pegg managed to pull of the sequence brilliantly with his subtle brand of humour. Benedict Cumberbatch as the one man army is both sinister and believable as Khan and the most hunted man in the Galaxy. He is as expressive as a chameleon and displays multiple personas as Khan. He is a brand of villain to watch out for both in the movie and in his future outings.

The action sequences are impeccable and even though over the top, the technology used makes them s believable. Director J.J. Abrams with his penchant for directing action movies leaves no stone unturned for this one. These men and characters are taking a legacy created by Gene Roddenberry (a visionary and genius by any standards) to the next level and venturing into unchartered space … “To boldly go where no one has gone before”.

A movie like Star Trek or any of its parts cannot and should not be reviewed according to me. My purpose of writing this is to make you fall in love with Star Trek if you are not already.