Dhoom 3 …… Doom Doom … Too many chases spoil the plot!

We now for a fact know that the SWAT and the Chicago Police Department (CPD) is no match for our own “Perfectionist” bank robber Aamir Khan, a fact reinforced by a very reliable Yash Raj Films banner which once put the obscure country of Switzerland on the world tourism map. In fact the CPD is so downright incompetent that they need to call in two Mumbai cops to track down this Joker thief. 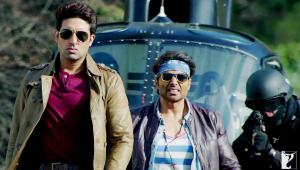 When agencies like the SWAT and CPD fail, two Mumbai cops are called to rescue them out of their misery!!!

Abhishek Bachchan & Uday Chopra are the only world famous super cops, who can rescue this incompetent CPD and the SWAT teams in their own country, and are roped in to assist the super sexy cop Tabrett Bethell who would give Sunny Leone a run for her money. No wonder other cops can’t concentrate on their job. Downtown Chicago is the hub of activity in the plot and maybe now the Indians will start making a beeline for the Chicago city tours as they know most of the streets. I in fact spotted a Starbucks in one shot where I first had coffee in Chicago so my ticket money is accounted for.

The Super Villain bank robber on his Super bike which Batman would kill to have.

The plot has holes so big that it confused our very own Chulbul Pandey whether he was watching an Uday Chopra or an Aamir Khan movie. The stunts and effects keep getting preposterous as the movie progresses. Enter Aamir Khan running down vertically from a bank’s building aka Spiderman/ Batman. His BMW Bike aka Jet Ski aka Submarine aka Bike seems to be the item that has had the benefit of some level of detailing and which is also the focal point of all chase sequences. Aamir has tried hard to give his best dramatic expressions in an already weak plot but fails miserably more so because it seems he has forgotten what an action hero audience wants. 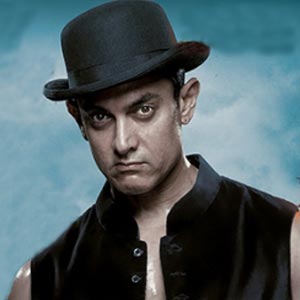 Abhishek Bachchan probably was liked the most because the grim tight expression and the permanent frown which he carries throughout the movie is what all the men in the audience had when they walked out of the theater. He flies in and out of flight sequences on an Auto-rikshaw, a bike or sometimes just flies. Uday Chopra who resurfaces as an actor only when the Dhoom franchise decides on a sequel, is probably the only actor worse than Armaan Kohli from Bigg Boss 7, though Armaan still got Tanisha. Katrina Kaif is quite hot … ummmm can’t think of anything else. He would also be able to tell the whole world and his grandkids one day that he acted with Aamir in a movie! Jackie Shroff I guess needed the money like his character in the movie.

She is HOT … only if she had a bigger role than 2 minutes the rest of the 170 minutes would have not seem so long!

No matter what one says or how much money the movie collects, Dhoom has DOOM written all over poor Aamir Khan’s perfect career. As for the other actors there isn’t much left anyways. Katrina Kaif is hot!

Most of the men had the same look when they walked out of the theater!!!

The choice though limited you can still take you pick, because I assume you would want to watch this “circus” at least once. So from Uday Chopra’s histrionics, Abhishek Bachchan’s “why so serious” look, Katrina Kaif’s ooomphhh quotient (She is hot), Chicago Downtown’s lovely landscape or Aamir Khan’s big ears along with his BMW bike, you are sure to find what will keep you in the seat for 172 long minutes. And if for some reason you doze of like me, just pray your neighbor doesn’t and can fill in the gaps which the director couldn’t.