Meat at the Joint … food crafted by hand & heart!!!

We Live to Eat … that has been our food group’s essence, but very few people understand that unconditional Love for food. Above that very few restaurateurs actually showcases their unconditional love for food in their creations. With all guns blazing (in this case forks and knives) the ‪#‎kibitzNINJAS landed up at The Joint Cafe for a night of some Meaty adventure. Vikrant Singh Mathur, the owner of the Joint, had promised the meat lovers a meal which they had never tasted before and we raided his restaurant to put his words to test.

The Joint Cafe … crafted by hand and heart!

Tucked up comfortably on the upper floor of the DLF Galleria market, which has lately seen a surge in the eating joints, The Joint is a quaint little cafe with a comfortable seating for around 25 people, completely reconceived and redesigned by Vikrant when he took it over almost 3 years ago. Known for its Holy Cow (tenderloin) Burgers, the cafe is a hit with the Expat community of Gurgaon, along with the young ones who even stop by for a steamy hot cup of Hot Chocolate while enjoying the music. The passion and personal touch shows in the decor, especially the walls, which Vikrant has adorned with posters of Hollywood starts to great Rock bands from his collection.

The Quaint cafe with warm interiors and a cozy seating!

The stars on the wall … a personalized touch by the owner, Vikrant!

However, not just the decor but also the food has been curated with personalized touch and preferences at Joint. As the tagline goes … “crafted by hand and heart”.  For now, I will let the pictures do the talking!

The Joint read to host the #kibitzNINJAS

Guys take a bow and for those who would like to know what all we gorged on, the dishes for the will blow you away and you might just ask, “Did you really eat all that?”

Settled in and ready to go to work!

The foodies arriving and raring to go!

We started with the BBQ Chicken Wings and the wings vanished before the server even set the tray in on the table.

The winter mulled … happy and high! 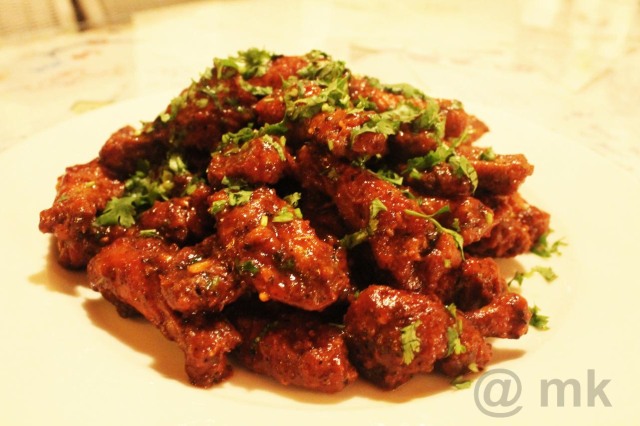 Next in line and in sizes I have never witnessed were the Glazed BBQ Pork Ribs in smoked Honey BBQ Sauce. The Winter Mulled Wine arrived right alongside and as the Chef said, a necessary accompaniment to the meats that were starting to roll.

We Ribs were amazing and we were unabashedly stuffing our mouths with them, when the Weeping Lamb Roast was served to us. The Whole leg cooked in garlic and rosemary flavour was chewy enough for us to enjoy the texture, but cooked well enough (to use a cliché) to melt in the mouth.

The mighty Pork Shoulder … completely floored by this piece of meat!

I did get to do the honours!

The star and what took my breath away was the Pork Shoulder Roast cooked in Bordeaux Wine and served with Herbed Potatoes and Bacon Jam (yup, you heard that BACON Jam). I did get the honour of carving up this massive piece of meat and test my skills with the Chef’s weapons. The Meat was so well cooked all through the inside that the Cuts were easy, though I did display some amount of finesse. 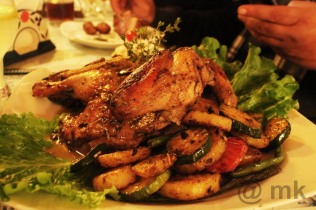 The Whole Chicken Roast on a bed of veggies dripping in sauce! 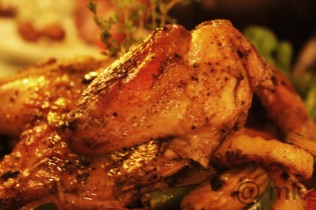 The colours and textures on the bird were a work of art!

From the Boar to the Bird and we had three different varieties of Birds lined up. The whole Chicken Roast again marinated in Wine, was artistically laid out on a bed leafy greens served with cut veggies soaking in the Chicken’s sauce. The gloves were off and one of us just snapped a leg of Chicken and got down to work.

The Guinea Fowl stuffed with bacon!

Some would say that was a lot of meat, but we were still getting warmed up and the Guinea Fowl Roast stuffed with Bacon just landed in front of us. This was definitely an eating Binge now, a no holds barred Meatathon and we were shifting to top gear!

The Chef teaches us the nuances of carving a Turkey!

And the top gear it was with the grand finale of the Roast Christmas Turkey stuffed with Pork Sausages and prunes served with raspberry sauce. We left more stuffed than the turkey, but we are food Ninjas and we boy did we dive into it. The colour and the texture made us fall in love with this bird, and the chef gave us ample time to “bird-watch” before he started carving out the white meat with nimbleness.

The Apple Crumble … we did leave some space for desserts!

We were already done when Vikrant announced DESSERT. For some the word was a question, for some an exclamation and for some a relief. But when Apple Crumble Pie with Vanilla Ice-cream was served, it was excitement once again!

The smiles say it all!

Flanked by the men who made it possible and awed us with their culinary skill and love for food … Ankit and Vikrant!

We were floored by the man and his team that weekend when we witnessed, tasted and stuffed ourselves to the creations of the chefs at The Joint Cafe, DLF Galleria. Their team of talented chefs who gave us one of the best meals we’ve ever had … No holds barred. The food just kept coming and we just kept binging. There was no stopping them and there was no stopping our foodies. The unconditional love for food which we witnessed, I will try to tell through these pictures. But, I definitely recommend that you try this quaint restaurant in the DLF Galleria, Gurgaon.